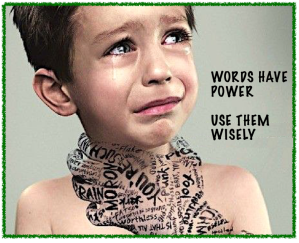 But there’s more to a person’s stressors than just experiences. We come “into this world in structures & conditions already established,” which are often punitive & embedded in racial bias. They limit opportunities & come with built-in economic & social inequities. (More…) 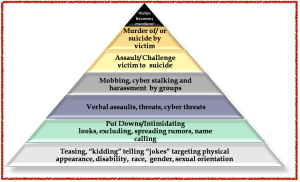 destructive behaviors – at school, cyber bullying, at work & as domestic violence, sometimes leading to suicide or murder.
Domestic violence usually starts with words, & then escalates.  In at least 3 cases a day in America, this pattern of violence ends in a death!

Many ACoAs experience the base level of verbal abuse all thru childhood, causing a life-time of slow self-destructiveness via self hate, in thoughts & actions.

As Rogers and Hammerstein said in South Pacific, “You have to be carefully taught” – to hate.  Cruel messages remain powerful because they were spoken by people who were supposedly safe, trustworthy & loving. So the words & their meaning were never challenged, simply accepted as core truths. Like the teenage boy who eventually killed himself because he believed his girlfriend who he trusted, when she kept saying : “You’ll be better off / You just have to do it / No more pushing it off /  No more waiting…..”   (More…)

♦ HATE
The Pyramid shows biased behaviors, growing in complexity from the bottom up. Behaviors at each level negatively impact

individuals & groups, with increasingly more life-threatening consequences, each level supported by the ones below.
When actions at the lower levels are treated as acceptable then those at the next level seem “normal” & therefore acceptable, possibly leading to genocide. (“Human Rights“)

“Nonviolence means avoiding not only external physical violence but also internal violence of spirit. You not only refuse to shoot a man, but you refuse to hate him.” Martin Luther King Jr.

♦ VIOLENCE
To understand the violence pyramid, we must first understand rape culture, where people experience a continuum of threatened violence, from sexual remarks to sexual touching, to rape itself. In any such culture both men and wom

en assume that sexual violence is a fact of life, inevitable as death or taxes. Rape Culture

However, much of what many people accept as inevitable – especially women – is actually the outward expression of values & attitudes that  spiral down into progressively more abusive behavior, as seen in 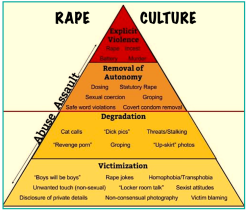 both pyramids.
As with all these tragic events, when anyone gets away with the attitudes & actions on the bottom tiers their ‘right’ to do so is reinforce, & so excuse those above. For this to change, the culture must change.  (More…..)

◆ SURVIVING & THRIVING
PHYSICAL: Look for safety when under threat. Pay attention to – and trust – your bodily sensations of stress. Find natural / nature environments that can soothe as well as expand your horizons.

SOCIAL: Get away from hateful & destructive relationships (avoid / hide), & only re-connect if the abuser gets help to change, or via an intermediary. Look for like-minded allies for support. Communicate your emotions without self-judgement, with safe people.

PERSONAL: Make use of trauma experiences as a way to learn about yourself – what your strengths are & where to make changes. Continue to express thoughts & emotions. Find or regain personal freedom from stressful people & situations. Learn when to bend as well as when to stand firm.

This site uses Akismet to reduce spam. Learn how your comment data is processed.

HOW to TALK to KIDS site