EACH CULTURE THINKS
their parenting style is correct

ORIGINS – The most popular ideas about parenting styles – in the West – come from the work of Diane Baumrind (1960s), who was interested in the different ways parents tried to control or socialize their kids. At that time, to compensate for overly-strict ways, many parents went to the other extreme, putting very few demands on their children & avoiding any sort of parental control. Her ‘Authoritative’ style was the balancer.

Parenting in “The culture of American families”.
Research says families fall into 1 of 4 “cultures”, which is more important than any individual parenting style.

Never mind helicopter moms or attachment parenting. According to a U. of Virginia 3-year study of USA families (published in 2012), the next generation is being molded by:
• the “Faithful,” 20% of parents from traditional Christianity, Judaism or Islam, who adhere to “divine, timeless morality” to give them a strong sense of right & wrong

• the “Engaged Progressives,” (21%) – the least religious. Morality is about personal freedom & responsibility, with few absolutes except the Golden Rule. They value honesty, trust what “feels right,” & allow moral latitude

• the “Detached“, (19%) let kids be kids, equally skeptical of the “old certainties” of the Faithful & the views of the Engaged Progressives.
They are primarily white, with blue-collar jobs, no college degree & lower income…. are pessimistic & seem resigned about the economic future & their children’s opportunities.They say they believe in God, but don’t attend church, & religion is not an important part of their children’s lives

• the “American Dreamers,” (27%) – the most common family culture among blacks & Hispanics. They’re optimistic about their kids’ opportunities & abilities. Even with relative

ly low household income and education, they “pour themselves” into raising their children and giving them material and social advantages. They try to protect their kids from negative social influences and strive for strong moral character.

The goal of the this study asks Qs
“to distinguish the diverse moral narratives crafted in the daily inter-actions between parents & children.
• What are the treasured hopes, deepest fears, & most pressing challenges of today’s parents?  Where do they turn for support?

• What role, if any, does “character” have to play in the lessons children learn?
• Is contemporary life too fluid to anchor in stable, shared convictions?
• What does it mean to be a “good parent” or a “good child” in an era when moral sign posts point in multiple directions?

CULTURAL DIFFERENCES
Diana Baumrind (developmental psychologist at the University of California at Berkeley): Although her 4 styles have been applied in places as varied as Brazil, China & Turkey, they don’t always “map” onto local parenting methods – which explain why some studies report different outcomes.
• Japanese-A. parents valued well-behaved children, whil

• re. Korean-American parents, over 75% of the sample didn’t fit into any of the standard parenting categories (Kim & Rohner 2002).
• re. Chinese parents, the Western authoritarian parenting style doesn’t quite fit traditional Chinese practices (Chao 1994).
• re. Spanish adolescents, studies showed that kids from permissive homes were as well-behaved & adjusted as those from authoritative ones

🌹Even so, there’s remarkable overall agreement across many cultures regarding Authoritative parenting – consistently linked to the best child outcomes. (Gwen Dewar, PHD ) Scroll down

Steve Doughty (Daily Mail, UK) writes: “Taking a ‘tough love’ approach to parenting increases the chances a child will grow into a well-

rounded, successful adult” a think-tank said yesterday.
Combining warmth + discipline means youngsters are more likely to develop skills such as application, self-discipline and empathy.
The Demos report found “these traits were shaped during the preschool years – more often as the result of ‘tough love’ parenting – regardless of whether parents were rich or poor.” (MORE….)

I CAN’T GET THAT WITCH VOICE
out of my head!

The SOCIAL GENOME Model (SGM) looks at Qs such as: Is the USA still an opportunity society? Can people achieve the American Dream? How can we help more people reach the middle class?
The promise of upward mobility is a central tenet of the American Dream, one of our core civic values. The SGM tracks the academic, social, and economic experiences of individuals from birth through middle age in order to identify the most important paths to upward mobility.
(“The achievement gap…..” // “Social Genomics”)

Achieving the ‘dream’ depends on being born to adults who are ready to be parents, PLUS being able to succeed at 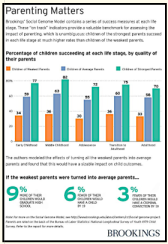 each subsequent stage in life.  5 benchmarks have been identified as good predictors of eventual economic success:
• born to a non-poor, 2-parent family
• being ready for school at age 5
• mastering core academic & social skills by age 11
• graduating from HS with decent grades & avoiding risky behaviors during adolescence
• getting a post-secondary degree (PhD), or the equivalent income before age 30.

This CHART clearly shows by % what we know intuitively & from experience:  (see also “Parenting Gap”)
• children of weak parents are consistently the least successful thru life
• children of strong parents are the clear winners, and
• children of average parents fall in between, but are closer to the ‘lucky’ ones in performance.
BUT – If weak parents could improve themselves to become average, their children would have an almost 10% improvement in their success rate.

Parenting styles & TEEN DRINKING
Many factors contribute to teenagers’ experimentation with alcohol & drugs. Genes play a significant role, as do peer relationships. And since teen years can be adversarial – it’s better to start talking to them about ‘using’ while they’re still young, as early as 4th grade.

Researchers at Brigham Young University have found that teens who grow up with parents who are either too strict or too indulgent tend to binge drink more than their peers. “While parents didn’t have much of an effect on whether their teens tried alcohol, they can have a significant impact on the more dangerous type of drinking,” says Stephen Bahr, Sociology at BYU.

• Teens raised by indulgent parents, who tend to give their children lots of praise & warmth – but offer little in the way of consequences or monitoring of bad behavior – were among the biggest abusers of alcohol (about 3x more likely than peers)

• The same was true if parents were so strict that no decision was left to the teen’s own judgment. “Kids in that environment tend not to internalize parental values or understand why they shouldn’t drink,” says Bahr. They’re 2-3x more likely to binge drink.

• The parenting style that led to the lowest levels of problem drinking borrowed something from each of the extremes:
— from the indulgent end: warmth & support, AND
— from the strict end: accountability & consequences for bad behavior
CHART from “Successful Parenting”

I WISH THEY HAD BEEN more helpful & supportive!

PERSONAL WISDOM
Obviously, different parental styles contribute to how each child turns out – that is – their adapted personality, most often forming the false Persona in wounded people. It’s a major factor in how well a child will succeed in life – whether they manage, achieve, meet & overcome challenges OR flounder, run from stress, fail to cope or give up.

A 1994 study found that “good adjustment” in adolescence was overwhelmingly associated with parenting style. (‘Child Development’ ~ Steinberg, Samborn, Darling, Mounts & Dornbusch).
Of interest is what helps or hinders the development of wisdom, which involves being flexible – the ability to use different kinds of behavior when circumstances demand a change in response.

Whatever the reason or circumstance, when parents stick to only one style, a child will only learn that way of dealing with conflict & uncertainty. When parents are unable or unwilling to vary interacting, they stifle the flexibility needed to develop wisdom in later life.

Autocratic (authoritarian) parents tend to produce children who are “dismissive”. Other people have no intrinsic value but must prove themselves worthy of respect & attention, just as the child had to do with his/her parents.
This is commonly referred to as “conditional regard.” You’re only worth what you’ve earned

Indulgent parents who give their children free rein, tend to create adults with a “preoccupied” relationship with others. As adults they’ll try to find the same indulgent, ‘unconditional regard’ from others they got from their parents, forever chasing a lost childhood

Indifferent parents who are cold & fitfully controlling, create an atmosphere of uncertainty & mistrust. An absence of affection, rules or emotional support sets a child adrift in a chaotic social environment without a built-in compass. This creates ‘fearful’ adults who usually find the world of people extremely difficult & so try to limit or avoid relationships

Democratic parents produce a more ‘secure’ adult, having received warmth & affection, but within a set of rules for appropriate behavior.
However, if these parents are too supportive without teaching the child when something is ‘off’ in their thinking or behavior, they may grow up to be —  overconfident about their ability to engage with & persuade others, the same way they were able to do with their parents.
Without any sense of realistic uncertainty / insecurity, these adults may form delusions of grandeur, believing they’re capable of greatness, without the actual ability. 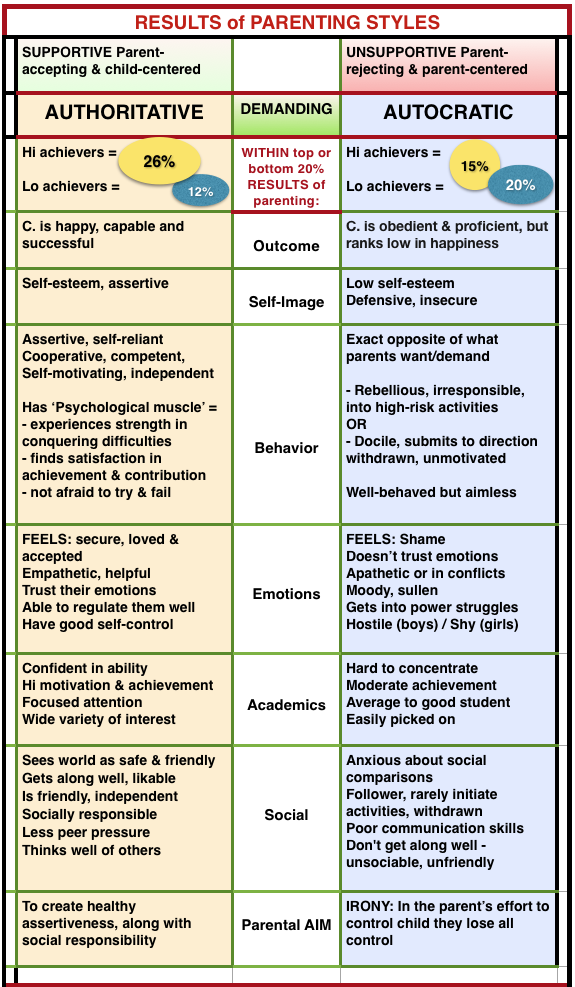 I LOVE OVERVIEWS! – They provide perspective

Our basic identity is modified & shaped by our experiences with our parents – forming the structure of our adult personality. What we learned then is deeply implanted in our most primitive, powerful emotions as young children, when we were totally vulnerable to being molded.

• Each of us is unique – different from everyone else, both as individuals & in relation to our family structure (gender, birth order, looks, interests….).
• And each parent has their own pre-set core Self & personality style. The mix & match is complex & often at odds.

Finding actual cause-&-effect links between specific parental actions & children’s resulting ‘personality’ is not simple or easy. Some children raised in dramatically different environments can later grow up to have remarkably similar personalities.

Conversely, some who share a home & raised in the same environment can grow up to have astonishingly different personalities –  due to the same or different Myers-Briggs, Enneagram, Astrology….
However, researchers have found correlations between these 4 categories & how children turn out

Realistically, the Parental Style used is the one that each child experiences, not the one the adults ‘think’ they’re working from, or wish they could work from. Actually, most parents switch between all 4.
The length & intensity of their interactions with children are based on emotional states, motivations, engagement, levels of stress, feeling fresh or tired…. at any given moment.
But most parents always default to a favorite negative style, while only a few aspire to / work at living more in the healthy one (Authoritative).